Posted by TyH Team on 8/30/2018 to Fibromyalgia
Can a probiotic help you think if you have fibromyalgia, a disorder known for its cognitive issues? Perhaps so says a new study.

As probiotics continue to gain their deserved recognition in helping to alleviate and mitigate various issues originating in the GI tract, they are now also being considered for therapeutic use for a range of other conditions. It appears that this enteric system with a "brain" of its own has more influence over brain processes – which include thinking – than previously believed. For instance much of our neurotransmitters are manufactured in the GI tract. This fact alone means your GI health is linked to the health of your brain and nervous system.

With this knowledge in mind, a team of researchers in Spain hypothesized that fibromyalgia (FM) may benefit from probiotics, stating their use "might be a new treatment that could improve the physical, psychological and cognitive state in FM."
Read More 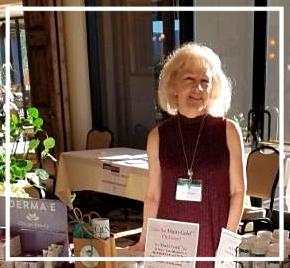 On January 27, the Tonto Verde Resort in Arizona sponsored a Wellness Fair and invited To Your Health to exhibit, along with other wellness providers offering education on acupuncture, essential oils, massage, physical therapy, nutrition and other holistic therapies. It was fun to interact with attendees and other health professionals in the relaxing and beautiful Tonto Verde Clubhouse. Margy at the fair (right).

The Best Time to Take Your Probiotics

Long before the media was a buzz of ads about why you need a probiotic, naturopathic doctors knew the value of an optimally functioning GI tract for immunity and a host of other health benefits. Your GI tract is teeming with billions of organisms (friendly bacteria species) which help you make and absorb vitamins and minerals, form natural killer cells to fight infection and of course, digest your food for the nutritional support your body needs on a daily basis. Everything is not all good down there in the dark!

Most of our readers know I am not one to make new year's resolutions. I believe you make your life one day at a time, one decision at a time. But the change of a calendar page is as good a starting point as any, whether it is to a new month or a new year.  Season to season. Winter holds secrets it tells only to spring, passing along a ritual of unfolding that marvels the eye. Bare, dark trees to a bloom of leaves. Will it be a promise of apples? Sweet cherry blossoms? Or simply a nest for a grateful family of birds and a haven for squirrels. Like nature, so too the human spirit goes through its season of change, perhaps from the dark to the light. From broken to healing. New growth beyond its present hibernation. Life's mystery lying just beneath the cold and the hidden.